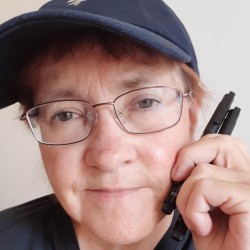 Open Right of Reply to the readers of the Morning Star, from political cartoonist Stella Perrett, and to the people who unthinkingly trashed her as ‘transphobic’ on twitter.

In view of my case being featured prominently in the Mail on Sunday’s article “What it feels like to be cancelled” on 12 July, I feel it’s now time I published what I would like to say to the readers of the Morning Star (MS), the newspaper who cancelled me back in February.
The paper are unable to publish it, because their hands are tied by the big trade unions who fund them. Notably the GMB and Unison, who pressurised them to apologise for printing my cartoon, called ” Endgame”. Although other unions were braver, and assured the paper they would not join in with the censorship – a shout out here to the CWU, and USDAW.

This cartoon was a literal comment on the very real, physical, fear women and girls feel at the prospect of entire men being allowed into ‘Women-only’ spaces, which in the UK, have been protected since the Equality Act 2010. A fear which has been borne out by the ever increasing list of male criminals ‘self-identifying’ as women, committing crimes against women, which are then reported in court transcripts and the media, as BY women. (Have a look at the Youtube film “These are not our crimes“). And the ever increasing number of men, self-identifying as women, who are being allowed into women’s hostels, rape crisis centres, prisons, hospital wards, both as inmates and staff, as well as public places like changing rooms.

In February I read news stories about the potential reform of the Gender Recognition Act 2004 which might loosen up women’s protection. The newly elected Tory government was making noises that it would stand firm on Women’s Rights.

At the same time, the Labour Party were holding a Leadership election. Three of the candidates signed a pledge that members must use preferred pronouns, and respect other people’s, or be expelled from the party. (This was immediately ridiculed by thousands of Labour members who started tweeting ‘#ExpelMeToo‘)!

The party had even labelled the new LGB Alliance and Women’s Place UK
(WPUK) as ‘hate groups’. So the trans topic was a real hot potato as a news story, and this was how I operate as a political cartoonist, by reading about, then addressing, the current issues of the day.

I was an unpaid contributor to the MS, as are all their contributors, the small circulation daily paper only survives by donations. It is a co-operative which acts as the mouthpiece of Britain’s Communist Party. So my cartoons were normally following their agenda – anti-monarchist, anti-austerity, anti-gig economy, even gently lampooning the Labour party.

And the paper has a history of standing up for Women’s Rights, proved by their regular publishing of articles by WPUK and writers like Jo Bartosch – or so I thought.

My cartoon “Endgame” was the first cartoon I had ever sent them on the subject of the GRA in my 5 years as their regular cartoonist. At various points in those 5 years, they had called me their ‘Star’ cartoonist, ‘one of the country’s best political cartoonists,’and ‘one of this country’s most incisive political cartoonists’. In their advert for one of my one – woman shows in 2015, they said: “She frequently subverts the mundanity of the everyday with barbed commentaries on the political scene.” They even said they were ‘deeply honoured’ when I visited their offices to give them the framed originals of two of my Jeremy Corbyn cartoons. (You can see the photo in the Free Speech Union’s blog, 3 June).

I had also been an active member of the local ‘Morning Star Readers and Supporters Group’ and assisted at fund raising events, and sold my drawings to raise money for their fighting fund.

None of this was enough for them to stand up for their editorial decision, which in a newspaper should be collective; or to protect me as their contributor from the social media shit-storm which exploded over them, organised by transactivists within the trade unions.

They publicly apologised for the cartoon, and cancelled me, with no
communication or explanation.

I turned to the new Free Speech Union for help, and they wrote a letter of
complaint to the editor on my behalf.

This has resulted in a partial resolution of my dispute with the paper. I have accepted a personal apology from the editor, and am grateful for the support I have had from other staff there, and also from readers, who have copied me in to their own complaints to the MS on my behalf.

When I sent in “Endgame” I sent with it a short explanation. I did not think it was offensive, it was a specific depiction of a women’s -only space :single sex swimming sessions, which do (or did) take place at sports centres. (The newts in the pond).

It was a legitimate comment on a news item of interest to the MS readers, the potential expansion of trans rights in the GRA, which would impede, or even reverse, womens hard-won rights, fought for over the last 50 years. I called it Endgame, because I genuinely believe this is the last battle for Feminism – if women lose this one, it is game over.

You can listen to a discussion on this with myself and Meghan Murphy, on feministcurrent.com – see podcasts in May.
I explained to the MS that the issue was close to my heart, since when I was young I had felt like this (body dysphoria) – like many, if not a majority of young women, as we now know, with the disproportionate numbers of girls to boys going through transing drug, hormone, and surgery. And that had the drugs- hormone -surgery route been so readily available in the early 70s, and had my parents known about it, I might have gone down that route myself.
However, the MS did not see fit to print the cartoon with either its title, or my explanation. Had they done so, at least people would have taken it in context, and at least some would have thought twice about trashing my reputation (an unknown amateur artist !) as collateral damage in their enthusiasm to give the MS a kicking, in the Left’s never-ending turf-war.
That’s turf, not ‘Terf’ – a new word to me, applied to myself, which I had not
heard before. I had to take a rapid crash-course in modern feminism!
Until this point I had never heard the names, Owen Jones, Dr Adrian Harrop, or on the women’s movement side, Magdalen Berns, Posie Parker, Meghan Murphy.

I have had tremendous support from feminist-friendly journalists, websites, and platforms, especially spinster.xyz the ‘women centred’ version of Twitter, a community of thousands of women who have been cancelled and no platformed – most recently by the Reddit take-down of women’s sub groups.

In the 5 months since this happened, I have become a radical feminist, revisiting the feminism of my 20s, when I was one of the few female apprentices on Lambeth Borough Council, and in my spare time went to early Spare Rib meetings,and campaigned for Gay Rights; this at the time of their existential crisis, the AIDS epidemic.

As I said to the editor of the MS in a recent phone call (the Free Speech Union pressure helped me to re-establish contact) they now face a threat that could wipe Gay men and Lesbians out of society (by transing non-hetero-conforming boys and girls) and from their own history (by falsely labelling known Gays and Lesbians as trans – such as Alan Turing).

I asked him, do you think I would give them less support now, than we gave back in the 70s? Now, when they need everyone’s support the most? I was astonished when he told me the unions had not allowed him to print anything on Women’s Rights since February, until he prints a long article by a trans activist to ‘prove’ that the paper supports trans rights.

The MS is of course, not a proper newspaper. It is the voice of a political party, and it is not a member of IPSO or IMPRESS, the Industry’s regulatory bodies. So it’s journalists are under restrictions on free speech, not just on this issue. For example, they cannot criticise communist regimes abroad, even to talk about atrocities like the forcible sterilisation of Uighar women in China. Nevertheless, it has in the past stood up for Women’s, Gay and Lesbian Rights.

I hope it will one day do so again.

As the editor admitted to me, the political landscape on the trans issue is
changing.

Too damn right it is…

Where you can find analysis of my experience with the Morning Star:

29 February 2020
uncommongroundmedia.com – Dan fisher, “The Eclipse of the Morning Star”

Defendfeminists.net, in their July 2020 news stories

Listen to my podcast with Meghan Murphy on: feministcurrent.com – May
2020 podcasts.